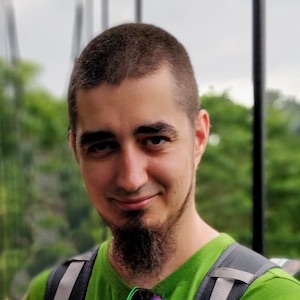 Daniel started out his career as a software developer, but quickly discovered his passion for infrastructure, and has since worked in designing and building solutions for Internet service providers, hosting companies, open source projects or fintech businesses.While he quickly got bored of operations but never forgot his desire to write code, he’s now an advocate for DevOps practices, loves Everything-As-Code, thinks in pipelines, and is an absolute sucker for microservices, containers, cloud systems, and good challenges. He’ll most likely throw some sort of automation at any technical problem, but isn’t shy on getting his hands dirty with bash or python or perl code, stracing misbehaving binaries, or other “occult” practices.On his spare time, you’ll probably find Daniel either climbing some mountain, riding his adventure motorcycle on a scenic back country road up to a camping site, or riding his bicycle on a forrest trail, and probably making an youtube video out of it.

Dropping the monolith is always difficult, since it almost always involves changing tools, processes, and most importantly, mindsets. Changing everything at once is disruptive and probably subject to fail, and while allowing each team to come up with their own solutions might lead to creative solutions, putting them all together is probably a challenge of its own.Daniel will walk you through Mambu’s experience on our road to container-based microservices, a feature which we release internally as a Platform-as-a-Service (PaaS) solution, all based around a single clear ideology: GitOps, or in other words, Git as the source of truth.You’ll learn how any kind of change in our system is done through a git commit and/or Merge request, how we scale our deployments securely on any number of clusters through our pull instead of push model, how we configure and keep infrastructure updated as code, as well as how we ensure consistency between our code and real cluster state.